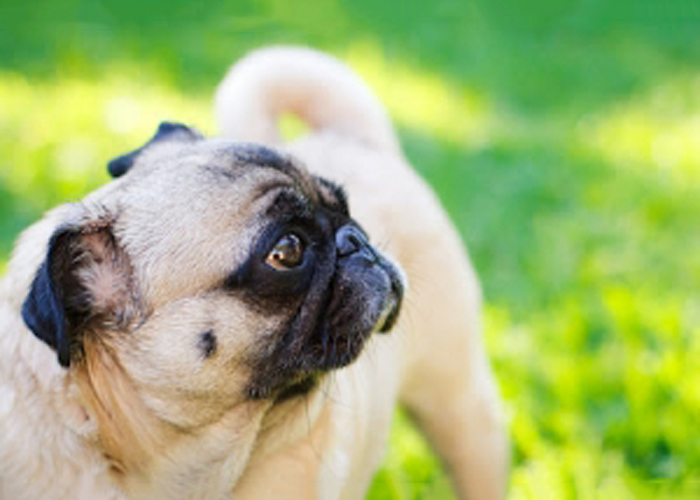 The Pug is well described by the phrase "multum in parvo" which means "a lot of dog in a small space." They are recognized for their even-tempers, playful personalities, and their outgoing, loving dispositions.

This square and cobby breed comes in fawn, silver fawn, apricot fawn or black, with a well-defined "mask" on his muzzle. A popular companion dog, the pug also excels in the show ring.

The Pug is one of the oldest breeds of dogs and has flourished since before 400 BC. Most researchers agree that the breed comes from Asia, due to its similarities to the Pekingese. China is the earliest known source for Pugs, where they were pets of the Buddhist monasteries in Tibet. The breed next appeared in Japan and Europe, becoming popular when Prince William II became the King of England. He owned Pugs and they became the fashionable breed for generations.

The Pug’s reason for living is to be near their people and to please them, and their sturdiness makes them a family favorite. They are comfortable in small apartments because they need minimal exercise, but the breed can adapt easily to all situations. The Pug sheds, but its short coat requires little grooming.

Symmetry and general appearance are decidedly square and cobby. A lean, leggy Pug and a dog with short legs and a long body are equally objectionable.

The Pug should be multum in parvo, and this condensation (if the word may be used) is shown by compactness of form, well knit proportions, and hardness of developed muscle. Weight from 14 to 18 pounds (dog or bitch) desirable. Proportionsquare.

The headis large, massive, round–not apple-headed, with no indentation of the skull. The eyesare dark in color, very large, bold and prominent, globular in shape, soft and solicitous in expression, very lustrous, and, when excited, full of fire. The earsare thin, small, soft, like black velvet. There are two kinds–the "rose" and the "button." Preference is given to the latter. The wrinklesare large and deep. The muzzle is short, blunt, square, but not upfaced. Bite-A Pug's bite should be very slightly undershot.

The neckis slightly arched. It is strong, thick, and with enough length to carry the head proudly. The short backis level from the withers to the high tail set. The bodyis short and cobby, wide in chest and well ribbed up. Thetailis curled as tightly as possible over the hip. The double curl is perfection.

The legsare very strong, straight, of moderate length, and are set well under. The elbowsshould be directly under the withers when viewed from the side. The shouldersare moderately laid back. The pasternsare strong, neither steep nor down. The feetare neither so long as the foot of the hare, nor so round as that of the cat; well split-up toes, and the nails black. Dewclaws are generally removed.

The strong, powerful hindquarters have moderate bend of stifleand short hocksperpendicular to the ground. The legsare parallel when viewed from behind. The hindquarters are in balance with the forequarters. Thethighsand buttocksare full and muscular. Feetas in front.

The coat is fine, smooth, soft, short and glossy, neither hard nor woolly.

The colors are fawn or black.  The fawn color should be decided so as to make the contrast complete between the color and the trace and mask.

The markingsare clearly defined. The muzzle or mask, ears, moles on cheeks, thumb mark or diamond on forehead, and the back trace should be as black as possible. The mask should be black. The more intense and well defined it is, the better. The trace is a black line extending from the occiput to the tail.

Viewed from the front, the forelegs should be carried well forward, showing no weakness in the pasterns, the paws landing squarely with the central toes straight ahead. The rear action should be strong and free through hocks and stifles, with no twisting or turning in or out at the joints. The hind legs should follow in line with the front. There is a slight natural convergence of the limbs both fore and aft. A slight roll of the hindquarters typifies the gait which should be free, self-assured, and jaunty.

DISQUALIFICATION: Any color other than fawn or black.